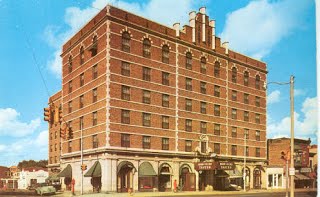 This year Resthaven celebrates 75 years of faithfully caring for seniors in the Holland community. We are honored to have served this community for 75 years and excited to celebrate with you. Resthaven began in 1945 when Reverend Paul Hinkamp and a dedicated group of church members from both the Reformed and the Christian Reformed Churches felt the call to establish a Christian Home for their older members. They named this home “Resthaven,” because they wanted it to be “a haven of rest for the elderly.”

The first home featured 11 rented rooms in a house on the corner of 10th Street and Central Avenue in Holland. Soon that home was no longer adequate to meet the demand for senior housing.

In 1948, the land for the current site of Resthaven Maple Woods (formerly Resthaven Retirement) was purchased on the corner of 32nd Street and College Avenue and officially opened to serve with 26 rooms in 1955. By 1969, the construction of additional wings provided Maple Woods with the capacity to house 103 residents. In 2017, Resthaven opened Maple Woods Cottages, on the Maple Woods campus. Maple Woods continues to be the hub of Resthaven’s assisted living program, caring for residents with a broad range of individual needs including the memory care wing.

Resthaven’s continuum expanded to include independent living in 1981 with the purchase of the historic Warm Friend in downtown Holland. The entire building was renovated to offer 102 independent senior rooms and apartments to area seniors along with a menu of support services. The Warm Friend Tavern originally opened in 1925 as a hotel built by the Holland Furnace Company. It’s name was inspired by the company motto, “Holland furnaces make warm friends.”

Resthaven’s skilled nursing capacity expanded with the purchase of the Meadowbrook 145-bed nursing home on 40th ave in 1989.

Resthaven named this program The Care Center. In 1996, Resthaven expanded our capacity to care for residents with dementia by opening the Good Shepherd Home. The James and Jean Cook Chapel, cafe, and offices were added in 2012 to enhance the programming space for residents and families together with an updated rehabilitation program.

Resthaven began offering in-home services in 1993 to better serve seniors’ needs in their own homes. In 2017, Home Care by Resthaven partnered with Holland Home and Clark Retirement Community to form Atrio Home Care, providing services to seniors in a significantly broader area and increasing the scope of these services. In 2007, Resthaven proudly opened a Green House™ Home, the Vern & Lois Boersma Cottage. The Green House model offers a warm, loving, and home-like sanctuary to those in need of longterm nursing care centered on meaningful relationships. In 2019, we were excited to open The Jay & Hazel Janssen Cottage, Resthaven’s second Green House™, expanding this program to 10 additional seniors. As we look at 2020, we focus on our original mission “to glorify God by providing a continuum of quality care and services that demonstrates the love and compassion of Jesus Christ.” Resthaven continues to serve approximately 1,200 people each year fulfilling this worthy mission. Resthaven has spent 75 years adapting to meet the needs of Holland’s seniors, and we look forward to meeting their future needs in the next 75 years. We will be celebrating Resthaven’s legacy throughout the coming year. Stay tuned for the launch of our new fundraising event, Celebration of Caring, on November 12. This year we invite friends to help us celebrate 75 years of faithfully caring and help us as we look to the future of Resthaven.